https://avnode.org/activity/athens-digital-arts-festival/">Athens Digital Arts Festival proudly calls all interested artists to submit their proposals under the theme of the 13th Athens Digital Arts Festival #PostFuture until 31/01/2017. Artists can explore the blurry PostFuture using their skills and imagination on one of the following categories: Installations, VideoArt, Animation,Digital Image, Performances, WebArt, Music, Workshops.

Can you imagine the Future?

The future as seen from the past and the

past as seen from the future

The elusive transition of digital culture is shaping a future ‘beyond digital’, where the physical and the digital are merging. In the late 90’s Negroponte stated that “the digital revolution is over”. Almost two decades later and having accepted that the digital culture has been stabilized into our everydayness, we are moving forward to a most abstract creation. The necessity of innovation and excess of limits, has been a primary goal imposed by the ever evolving technological fetish.

This futuristic lifestyle is reflected from the coherence of the ‘real – virtual’ boundaries. The humanization of technology along with the social and economic crisis lead to a replica of the physical world where everything is countable in digits, therefore simplified and transparent. Yet is post digital the real progress?

Exploring this blurry future, we invite artists to ‘transcend’ digital culture and exchange opinions under the theme #PostFuture.

Digital, synonym of progress for quite a while, is now common and accepted. Post digital is the new exciting phase, the entrance to an era where digital has fully integrated into society, art and media. Augmented reality maps the digital into the real world and people are born digitally native. What will then configure the future of art and how will artists state on that ?

Τhis fading capitalism among with the digital culture and activism, are shaping a world where

Hybrids, cyborgs and artificial intelligence shake and redefine notions such as life, morality, ethics, beauty, relations. Ideologies are embodied in codes and the evolution of the human specie is a convergence of the ‘real’ and ‘digital’ self.

Mapping humans’ impact on nature over the past decades, we ended up creating a hybrid urban-rural landscape. The coexistence of nature and biotechnology is necessary for a sustainable ecosystem. Will these two get along or will we reach a limit where nature will be a nostalgic remembrance ? 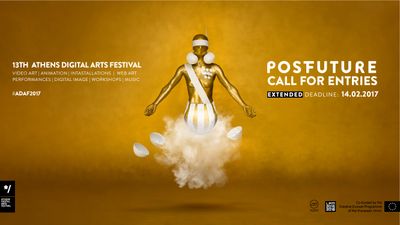