Here is the report of the third edition of http://livecinemafestival.com/">Live Cinema Festival held in Rome from September 8th to 11th, 2016, with a conference on the Audience development on the 7th of September, in the spaces of MACRO – Museum of Contemporary Art of Rome in Via Nizza.

The festival aims to offer the audience an overview of different ways of interpreting Live Cinema, from analogic of projectors 16 mm to the last digital experiments, through the performances of 8 international artistic groups with 15 artists coming from: Hungary, Poland, United Kingdom, Netherlands, France, Germany, Austria, Czech Republic and Spain and over 30 artists guests of the screenings and a selection of the most interesting roman djs for the opening apetizers with a grand total of over 50 artists.

Live Cinema Festival 2016 is made with the support of Roma Capitale, in collaboration with SIAE and is part of the program of the 2016 edition of the grant ESTATE ROMANA “Roma, una Cultura Capitale”. 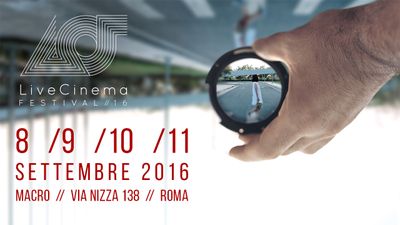