One World. One Heart.

Under the motto ”One World. One Heart”, iMapp Bucharest – one of the most important video mapping events worldwide, organized by Bucharest City Hall through creart – Bucharest Municipality Center for Creation, Art and Tradition – has launched an artistic initiative that brings a message of solidarity and hope all around the world, in the international context of the coronavirus pandemic, that has generated the current measures of social distancing as a necessary preventive measure.

The public awareness project of the mutual support – „One World. One Heart”, implemented internationally through visual arts, was made pro bono by the artists involved in it and it was technically and logistically supported by partners, without costs from the budget of Bucharest City Hall or from Creart.

46 international visual artists were invited to create 3D animations with a duration of 10 seconds, starting from the same visual template – a heart, that strengthened worldwide, through the creative force, the message of the solidarity campaign. The artworks were reunited into a single video that will be simultaneously projected on the façades of buildings from all over the world: Bucharest (Romania), Budapest (Hungary), Monterrey (Mexico), Seattle (U.S.A.).

In Bucharest, these artworks will be projected on the façade of the Palace of Parliament on April 17th 2020, 10 PM local time (9 PM CET) and they will be presented to the public, online, through a live streaming, on iMapp Bucharest Facebook Page.

The theme of this awareness campaign is ”One World. One Heart.”, reinforced by the hashtags #staybrave - a tribute to the front line heroes in the battle against the coronavirus, who put themselves at risk every single day // #strongertogether – a message to all the people that stay home in order to save many others (together we are stronger and only like this we can make a difference) // #lovecandoanything – a representation of how art is capable of showing the most noble feelings.

With the support of: George. First intelligent banking. 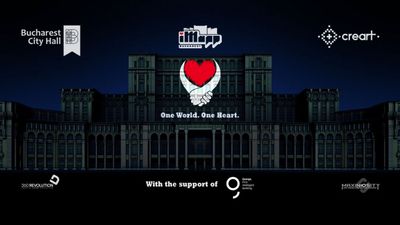